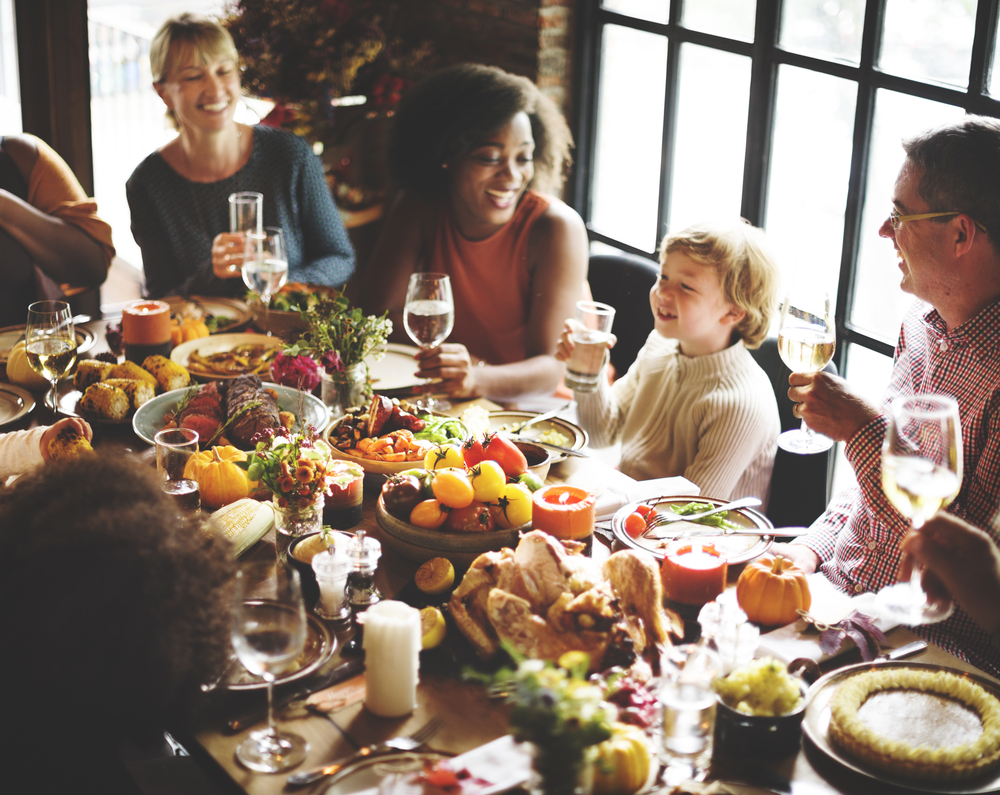 Oh, no! Once again this year, someone has switched the name tags you’ve carefully placed on each plate and you find yourself sitting next to your mean old Aunt Millie who smacked your bottom when you were four years old and has scared you silly ever since.

Cousin Fred is across from you, shy and silent as ever, listening but never talking or contributing. It’s like he’s afraid not just of mean old Aunt Millie, but of every single person at the table.

Grandma sits smiling next to you, busy surveying the table and passing bowls with a clockwork-like accuracy, making sure every plate is fully laden.

Everyone concentrates on eating, lifting one forkful of deliciousness at a time.

Yes, it’s nice having Thanksgiving, but you wish everyone would just loosen up, have some fun, and go beyond comments about the food.

What’s a host or hostess to do?

Shake it up a bit this year by asking eight great questions to make your guests really loosen up, interact, and laugh!

You can go around the table asking each person to guess.

You can create teams and make it a competition.

You can just shout out the questions and get boisterous responses.

You can even buy a cheap trophy or a stuffed-plush-animal turkey to hand out as a prize!

ONE: How many pounds of Thanksgiving turkey are eaten each year?

A turkey may weigh between eight and thirty pounds.

Cooks know to plan 1 to 1-l/2 pounds of turkey per person.

Every year, we eat 704 MILLION POUNDS of turkey!

TWO: What percentage of the population would rather eat Thanksgiving leftovers than the actual Thanksgiving meal?

Did you know that many, many people don’t like cranberries, sweet potatoes, or even pumpkin pie?

Four-fifth of the population, a whopping 81% of the Thanksgiving feasters, would prefer to eat leftovers than the actual Thanksgiving meal.

THREE: Turkey was not on the menu at the first Thanksgiving celebration in 1621. Scholars, however, suggest that nine other main courses were. What were they?

Keep in mind that Plymouth, Massachusetts is an ocean-side colony. Turkey was not on the menu, but the 44 surviving pilgrims, 90 Wampanoag tribesmen, and Governor William Bradford feasted on other kinds of main courses, including venison (deer) provided by the Native Americans, plus ducks, geese, swan, lobster, eels, mussels, bass, and oysters.

FOUR: On Thanksgiving, what city is the most traveled-to destination in the United States?

You’re in the thick of things here in Central Florida. The most traveled-to destination in the United States is Orlando, Florida, followed by Anaheim, California, and New York City.

The top two destinations are both the home of Disney World and Disney Land.

FIVE: What popular Christmas song with a two-word title was really written as a Thanksgiving song?

In 1857, a song was written for Thanksgiving entitled “One Horse Open Sleigh.”

The tune gained such popularity as a Christmas song instead of a Thanksgiving anthem, that in 1859, the title was changed to “Jingle Bells.”

SIX: A writer was assigned the task of coming up with a Thanksgiving side dish that “uses ingredients found in most American kitchens.” What annual favorite did she concoct?

In 1955, Dorcas Reilly wrote a one-hundred-word recipe that is still served on more than 20 million tables sixty-seven years later.

It was fast, easy, and cheap, so it became very popular.

Today, this one recipe accounts for more than 40% of the sales of one single ingredient.

SEVEN: What two states raise the most turkeys?

For years, Minnesota has been at the top of the heap of turkey production, but North Carolina is close behind. Other top turkey-producing states are Arkansas, Indiana, Missouri, Virginia, Iowa, and California.

EIGHT: What kind of sales are better on the night before Thanksgiving than any other night of the year?

Americans love to kick back before their day off of giving thanks!

However you spend it and whatever kind of turkey you prefer - talking turkey, going cold turkey, or drinking Wild Turkey – enjoy your holiday.

Please know that ServiceOne is grateful for you and is truly thankful for your business.