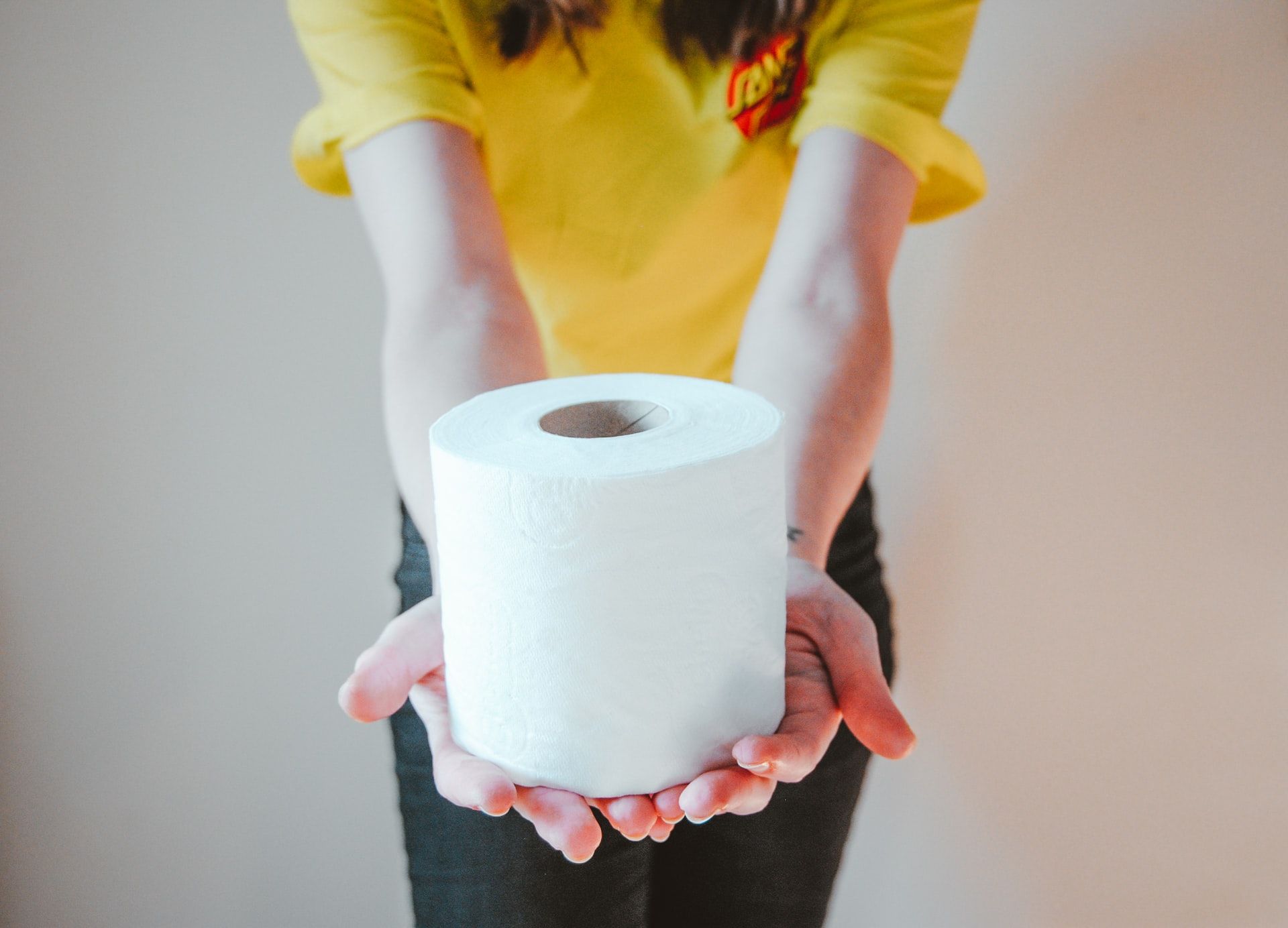 We use toilet paper every day. We think of it as an essential element of modern life. We like it so much that many of us rushed to stockpile toilet paper when news of the pandemic hit. (More on that later.)

If you look at the long history of toilet paper, you can see why we value this seemingly mundane, ordinary, most-necessary item of the modern home.

The Not-So-Pleasant Past Wiping Tools

Eons ago, early peoples used shells and smooth stones to wipe themselves, rinsing with snow or water, if possible. The other option involved using pieces of animal fur. It was a toss-up which method you chose, based on availability and personal preference. A hard scraping or a soft, cushy, but fur-lingering wipe.

People continued to use natural items like moss and leaves to wipe, until the first century, A.D., when records indicate the use of a “tersorium or xylospongium.” Someone had the great idea of taking a natural, soft, water-absorbing sponge. The sponge was put on a long stick and kept in a bucket of water, and then used by anyone who came into the public bathrooms.

(Check out Six Fascinating Facts You May Not Know About Your Toilet).

Are you wondering how we KNOW about the personal toilet habits of people thousands of years ago? We know about this because of an incident so bizarre that it was recorded in Roman records by Seneca, the philosopher, writer, and dramatist.

Seneca records the story of a Roman gladiator who committed suicide by going into a toilet and cramming the communal sponge-on-a-stick down his own throat. (Seneca’s records don’t indicate whether the gladiator was trying to prove some kind of masochistic, scatological point or whether he was an absolute lunatic … or both.)

How to Poo-Poo Your Enemies

If you had a terrible enemy in the First Century A.D., you might get a mental boost by poo-pooing your foe. Archeological evidence indicates that broken pieces of pottery had the names of enemies written on them and then were used to wipe. Powerful - even if slightly painful.

If you were wealthy or royal, you could afford to be decadent and use pieces of real cloth to cleanse, but such a luxurious expenditure of an expensive asset like fabric was rare. (It would be like ultra-rich people of today using real cashmere, absolute “cush-for-your-tush,” to wipe. Get the extravagance?)

The earliest known paper dates from between 140 and 87 B.C. and was found in a Chinese tomb. A couple of hundred years later, a Eunuch of the Court named Cai Lun figured out to make good quality writing paper by combining hemp, scraps of linen, old fishing nets, and tree bark. The natural ingredients were broken down with lye into fibers and stamped into sheets of paper.

The invention of paper allowed the evolution of toilet paper. Paper began to be used as a better, more personal, more usable wipe. The use of paper, in fact, was so popular that in 569 A.D. a Chinese scholar warned against accidentally wiping with wisdom written on pages:

“Paper on which there are quotations or commentaries from the Five Classics or the names of sages, I dare not use for toilet purposes.”

If you think toilet paper is a modern commodity, think again.

By the early 1300s, the Chinese were manufacturing toilet paper to the tune of ten million packages of 1000 to 1000 sheets per pack.

And if you think fragrance and scented paper is a new idea, get this.

In 1396, records indicate that the Chinese Emporer’s family was getting thousands of specially perfumed paper just for their private wipings.

Catalogs and Other Alternatives

Before the common use of paper, other people had other ideas. Archeologists have found a spatula-like device dating from the 1700s in stops along the Silk Road of China. This flat-ended tool was made of bamboo or other woods and wrapped in cloth.

Corncobs were another alternative, depending on where you lived.

No matter where you were, the history of our households was forever altered in 1857 when New Yorker, J. C. Gayetty began selling a "Medicated Paper, for the Water-Closet,” sold in packages of 500 sheets for 50 cents.

He was right when he tagged his invention with the slogan, “The greatest necessity of the age.”

The Pleasure of Perforation

Thirty-three years after Gayetty’s toilet paper push, perforated sheets were introduced, an advance most of us don’t even think about these days, but which drastically improved the potty process. (Imagine having to struggle with two hands deliberating about where to tear the paper off and how to get an even edge.) I bet none of us ever thinks about how nice it is to have perforated paper for an easy and automatic tear.

And if perforation was nice, the softness of paper was even nicer. By the 1930s, toilet paper was finally advertised as “splinter-free.” (Ouch. Talk about a pain in the butt!)

No one wants to feel dirty, be smelly, or get close to our own natural byproducts, so toilet paper is an absolutely necessity.

That explains why during the pandemic so many people hoarded toilet paper.

In times of worry, we needed our wipes more than ever before, or at least we thought we did.

One study looked at the stockpiling behavior of people in 22 countries and found that hoarding of toilet paper occurred in two groups of people: Those who were often anxious or fearful of the virus., or those who were conscientious, prudent, and organized.

Having plenty of toilet paper seemed like the way to be prepared for emergencies.

Can We Ever Have Too Much of a Good Thing?

But no matter how good toilet paper is, don’t forget that there is such a thing as too much of a good thing.

If you stuff too much down your toilet bowl at one time, you’ll stop it up. Still, toilet paper is much better for your toilet than “flushable wipes,” which you need to throw away instead of drop into your toilet bowl.

The Greatest Necessity of the Age

When J.C. Gayetty started marketing toilet paper as “the greatest necessity of the age,” he had no idea how right he was, only it wasn’t just the necessity of HIS age. Wiping has been a necessity for ALL the ages since humans began walking the earth. The history of toilet paper proves it.

ServiceOne is here to help with all your plumbing, drain cleaning, and HVAC needs. We can wipe away any mess and keep you clean and worry-free. Call us.